IN CONVERSATION WITH: KATHERINE JOYCE-KELLAWAY

We saw your immersive show early this year at Massey and knew that we would love to involve you with 30 Upstairs. The gallery, the rooms and the area were connected to you in many ways that were unexpected. What were those relationships and how have they shaped the work?

It’s been interesting creating a new work in a place where my husband Tony and I have a past history. And in the wider area my grandparents and father Although, I wouldn’t say that this has shaped the work specifically, the memories drawn from those experiences inform aspects of my process and research.

In regard to my father what I was able to pull from these relationships was specific experiences of materiality and light that is reflected in the work. For example the light that dappled through the net curtains at my Grandparents house at 84 Pirie Street. Muted images of the passerbys appeared and disappeared as they moved past the window.

In regard to 30 Courtenay Place I am very interested in our sensory responses to spaces in particular the way it can accelerate a memory and build a present and past reality in an instant. While I was building the work in 30 Courtenay Place, these triggers affirm the importance of a sensory connection to space. Such as the differing tonal sounds of footsteps on the brass plates of the steps, the heat intensifying at this time of the year, which you can feel as, you ascend the stairs. Although the building in many ways smells different today, every now and again a historic smell specific to the building collides with me and a memory will rush forward. The way the voices and the singing travel’s through the corridors and stairwells, which has a unique way of appearing and disappearing. 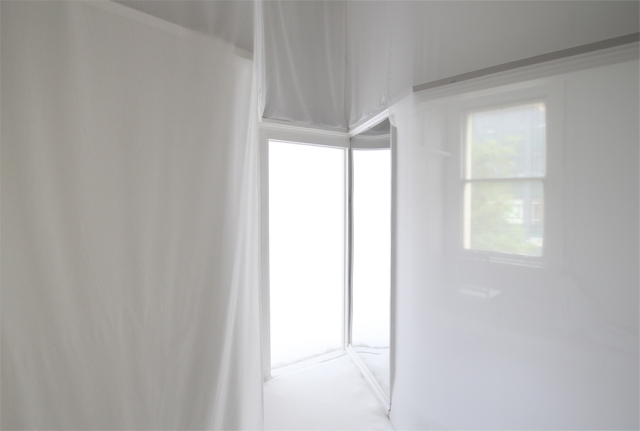 There has already been a diverse audience to visit Within Outside from adults to children, artists and those totally new to the gallery. What has been the most memorable reaction and why?

It is wonderful that there has is a diverse audience. You are probably in a better position to answer this than me.

Two memorable reactions stand out. First, a man (mature in age) on opening night who I watched engaging with the work several times. There was something magical and wondrous about the way he moved and explored the work. At times he appeared childlike and other times like a scientist or archeologist. I really wanted to talk to him but I didn’t want to break his exploration. It was his bodily response to the environment and his desire to want to make sense of what was occurring.

The second, a young man from a group of secondary school students from Upper Hutt. He was very agitated at having to take his shoes off and wear the ridiculous blue socks. Once inside the installation he disappeared for about twenty minutes and re-appeared happy, calm, yet excited and wanting to share his experience. The transformative affect the work had on him was very interesting. Whether at the time he was conscious of it or not he may consider this at a later date. These students said they hadn’t been exposed to this type of art and they asked some great questions about the work.

The work comes with your ideas, which resonate in the work, but people also relate to it in their own way. ‘It reminds me of …’, and  ‘I want to come back with…’, have been heard with high frequency from smiley faced figures as they exit. Do you mind if your intentions are not recognised by the audience?

How people relate to the work in their individual way is essential to the work. For me, my intentions are not prescriptive, they are a framework in order to create an environment for connection and exchange.  The work is experiential, giving license for it to be accessed by people in whatever way they want.

I think another point to make here, is that the work is constantly in flux. The light changes the work depending on, the time of day or the weather, the way you move through the space, or lie on the floor and whether there is one person or many people in the space who disappear and reappear amongst the layers. This changes the experience from one moment to another. Whatever people see, imagine or describe exists but at the same time it doesn’t exist. I think it is also telling when we try to photograph or video the works it seems to fall very short of describing what is being experienced in the space at a given moment. The work is ephemeral.

We are instructed at the entrance to the installation that it is our participation that activates the work, for some this is a very exciting invitation and for others it is ‘that take your shoes off kind of art’. Why do you think people have that negative response to interactive mediums?

This is very complex and I certainly wouldn’t want to second-guess peoples individual responses.

But naturally there’s the dread of the unknown, “what am I letting myself into”? And fair enough, who hasn’t experienced those cringy ‘participatory’ moments in the arts where you feel cornered and bossed about. I’ve observed that once people enter my work, they see it as more of an invitation to touch, lie down, move about and interact however they want to.

For some it is a big ‘ask’, the removal of one’s shoes. My intention is to connect the person’s body to the tactile qualities of the floor, relaxing and liberating, allowing freedom to play.

Also within the context of contemporary art viewing, codes of behavior are regularly upheld (“look, don’t touch, remain observant but respectful, don’t run, don’t shout” etc.) My intention is to break down those barriers in order for people to be immersed in the work.

It is the first time we have sourced external funding for a show. You completed a BOOSTED campaign with many people supporting you.  In what ways did that benefit your show?

I feel very humbled and fortunate to have had the support through the BOOSTED campaign. This campaign has financially assisted in funding a good chunk of the materials required for the installation. It has also helped provide a channel for people, who are interested, to support my work.

When you came to the gallery with your detailed model of the five rooms you planned to change we were bowled over by your ambition. What past projects and experience prepared you to complete such a massive work?

I never thought of this as being ambitious at the time, I just saw it as what had to be done. In saying that, I think the hard graft that has to be done to make the work, is part of what the work is about. Contemporary life is full of quick returns, ease, instants, bytes or reduction. The ‘occasion’ of the build I hope adds to the authenticity of what I am trying to make occur and the experience of people entering the work.

Both my parents have a very strong work ethic and have always had projects on the go; growing up in small town New Zealand you made things happen at your doorstep. They are both in their 70’s and made a major contribution to building the installation.

Secondly, working in theatre, particularly in the 90’s in Wellington at BATS and with Young & hungry, was a golden time of theatre innovation. There were some stunning memorable productions that were a visual feast let alone the performances themselves. Massive “pack in” and “pack outs” and “all nighters” were the norm.

This ethos followed through to my Masters installation, which on reflection was somewhat of an epic build.

This entry was posted in 30 Upstairs Exhibitions and tagged KATHERINE JOYCE-KELLAWAY. Bookmark the permalink.