Sam Mitchell’s clean, crisp, colourful compositions are incrediblly memorable. Her pop style shouts out through the painted perspex. Portraits of tattoo covered ‘cool’ kids with metallic hair- her signature look. Mitchell, based in Auckland, was acknowledged by New Zealands leading art awards, The Wallace Arts Trust, a few years back in 2010. Mitchell joins Bill Hammond, Sara Hughes, Rohan Wealleans and many more of New Zealands most influential artists in the prestigious winners category. The prize, now open for 2013 submissions, whisked the artist off to New york to enjoy a 6 month residency. Mitchell has enjoyed a string of successful shows since her return.

So, with that introduction which doesn’t even cover the majority of Mitchell’s achievements it is with great joy that we have added Come on Baby, ‘Pop’, to the 30Upstairs Collection. The work is acrylic and collage on a found book cover and measures a petite 200mm x 103mm.

First sighted in a Webb’s listing, the work was part of a large auction that happened in May. The Young, Wellington’s new gallery space, held a special preview evening of a selection of works. Much like the Art+Object event held here at 30Upstairs last year, the preview allowed for a Wellington audience to view Auckland based Webb’s exciting catalogue. We look forward to the next one.

To view more of Sam’s work visit Bartley Company Art, Wellington for her current solo show, on until June 22. 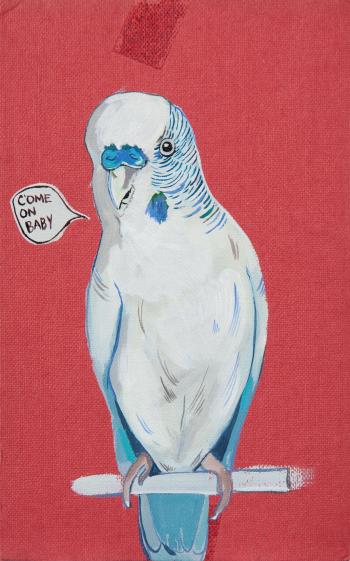